Office of the Dean

Menu
Office of the Dean 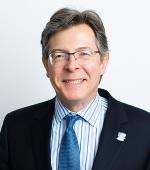 Robert W. Dunlay, MD’81, was named dean of the Creighton University School of Medicine in December 2013.

Dr. Dunlay, chief medical officer of CHI Health Creighton University Medical Center and professor of medicine and pharmacology, is a Creighton-educated nephrologist who has served as a clinician and educator since 1990. He had served as interim dean of the School of Medicine from January through December 2013.

Dr. Dunlay completed his premedical studies at Creighton in 1977 and earned an M.D. degree from the School of Medicine in 1981. He fulfilled his internship and residency in internal medicine, also at Creighton.

Dr. Dunlay completed fellowships in nephrology at Oklahoma University Health Sciences Center, Oklahoma City, and in nephrology research at Jewish Hospital at Washington University Medical Center in St. Louis. In 2008, he earned an MBA from the University of Massachusetts at Amherst.