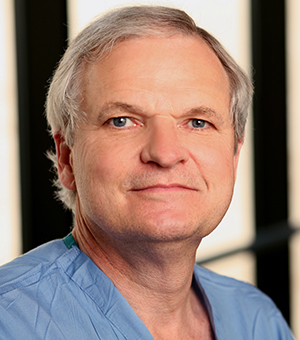 Robert J. Fitzgibbons, MD, FACS is the Harry E. Stuckenhoff Professor and Chairman of the department of Surgery at Creighton University School of Medicine in Omaha Nebraska. He graduated from Creighton University Medical School in 1974, and then traveled to New Orleans for his general surgical residency at Louisiana State University, followed by a fellowship in advanced general and oncological surgery at the Lahey Clinic in Boston emphasizing breast, colon and biliopancreatic surgery.  After completing his residency and fellowship training, he returned to Creighton University in 1980 as an instructor in surgery, climbing through the ranks to ultimately attain his current position as an endowed professor and now as Chairman of the department.  His research efforts after returning to Creighton University focused initially on biliary tract issues but evolved into the developing field of minimally invasive surgery and therapeutic laparoscopic surgery especially as it relates to the management of the biliary tree and abdominal wall hernias. He was one of the first academic surgeons in the country to perform a laparoscopic cholecystectomy in 1989. Subsequently he has been influential in the development of specific devices and techniques for minimally invasive surgery.  Because of this he was asked to join the American College of Surgeons’ committee on emerging technology with the express goal of a more orderly application of laparoscopic principles to other commonly performed general surgical procedures.   This work lead to two important randomized prospective multicenter trials dealing with the subject of inguinal hernia.  He was the Principal Investigator of a grant, which was funded by the Agency for Health Care Related Quality, entitled “Management of Groin Hernia: A multi-centered Clinical Trial”, Principle (RO 1 HS/AG 9860-01A1) with a budget of over $6,000,000.  The goal of the clinical trial was to determine if watchful waiting was a reasonable alternative to routine hernia repair for adult men with minimally symptomatic inguinal hernias.  He was a Co-investigator for VA Cooperative Study Trial #456: Tension-free Inguinal Hernia Repair: Comparison of Open and Laparoscopic Surgical Techniques, which was a randomized prospective trial comparing laparoscopic inguinal herniorrhaphy with its conventional counterpart.  The budget was also nearly $6,000,000.

He is a past president of the American Hernia Society and the Society of Laparoendoscopic Surgeons and a past board member of the Society of American Gastrointestinal Endoscopic Surgeons. He is a member of the American Surgical Association, the Society of Surgeons of the Alimentary Tract, and 21 other surgical societies. He has made over 400 national and international presentations on subjects dealing primarily with minimally invasive surgery and abdominal wall reconstruction. He is the author of over 300 scholarly publications including peer and non-peer reviewed articles, books, book chapters, and videotapes and sits on the editorial board of eight journals. He is the co-editor in Chief of journal “Hernia: The World Journal of Hernias and Abdominal Wall Surgery”.  In addition to his academic responsibilities, he is currently the medical director for surgery and anesthesia for the CHI Health Clinic, a network of 15 acute care hospitals and the university practice plan.