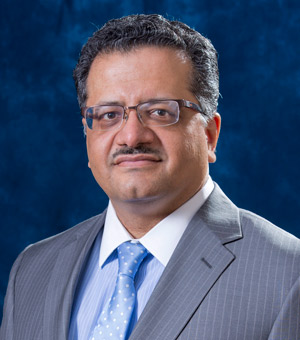 
Sanjay P. Singh, MD is the Chairman & Professor of the Department of Neurology at Creighton University School of Medicine. He is also the Medical Director of Neurological Services at CHI Health-Creighton University Medical Center. He is the past President of the Medical Staff at   CHI Health-Creighton University Medical Center. Earlier he was the Vice Chairman (Education) at University of Nebraska Medical Center (UNMC). He has also served as the Program Director of the Creighton-Nebraska Joint Neurology Residency Program.
Dr. Singh received his medical degree from M.L.N. Medical College in India, where he was the Valedictorian of his class. He completed a neurology residency at George Washington University Medical Center; he was the Chief Resident of Neurology in his PGY-4 year. He then did a two year fellowship in Epilepsy and Clinical Neurophysiology, as the Gilbert Glaser fellow, at Yale University School of Medicine. He is Board certified in Neurology and is a member of the American Academy of Neurology and the American Epilepsy Society. He is a Councillor of the American University Professors of Neurology and a member of the Awards Committee of the ABPN.
He is the author of the 'Locatelli & Singh's Handbook of Neurology'. He is the author of numerous articles and also a few Book Chapters. He has been the recipient of numerous awards and honors including the A.B. Baker Teacher recognition award by the American Academy of Neurology, The UNMC Chancellor's Gold U Award & Kudos award of the Board of Regents award for University of Nebraska. His research includes a novel neuroprotection which prevents brain cells from dying, as happens in neurological disorders like Dementia.
He has been invited to Lecture at many national and international institutions and conferences. He has also given talks to the community in TEDx, 'Science Cafes & Simply Science' programs.