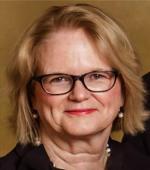 
Dr. Tierney was born in New York City and attended Fordham University. She received her MD from Cornell Medical College and training in IM and ID at New York Hospital/Cornell and Massachusetts General Hospital, respectively. She joined the staff in ID at MGH and became Assistant Clinical Director of ID as well as Fellowship Director before leaving to become Chief of ID at the West Roxbury VAMC and Assistant Clinical Professor at Harvard Medical School.

Dr. Tierney earned a MSc. in health services administration/health policy from the Harvard SPH. She served as a senior medical reviewer for the FDA from 2002-2008. After her and her family’s move to Nebraska, she focused on autism advocacy for a few years, but then joined NE DPH/Epidemiology Unit. As the Medical Director of the Healthcare Associated Infections and Antimicrobial Resistance Program at NE DHHS, she and her team created an antimicrobial resistance task force, developed a real time state antibiogram, and established a containment program for MDROs. From February through May 2020 she worked with all the epidemiology team on the response to COVID-19 including authoring and hosting thrice weekly public health and clinical COVID 19 update webinars for the Nebraska medical community.

Dr. Tierney is a member of IDSA, SHEA, CSTE and ACP. She was invited to participate in CORHA (Council on Outbreak Response for Healthcare Associated Infections and Antimicrobial Resistance) and was named Co-chair of CORHA’s Subcommittee in August 2018.She was named the Inaugural Awardee of The McKnight Prize for Healthcare Outbreak Heroes 2020.