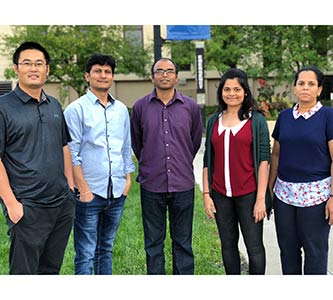 At any one moment in the human brain, billions of neurons are trying to communicate with one another in a massive effort bringing to mind the workings of a frantic telephone switchboard operator.

Of course, not all neurons connect with one another. Specific protein codes help connect specific neurons and the study of one such code by a team of Creighton University School of Medicine researchers has earned them a five-year, $1.88 million National Institutes of Health grant, which may have far-reaching implications for better understanding of mood disorders such as depression, anxiety and attention deficit disorder.

“The protein we’re specifically looking at, called glutamate delta-1, has been associated with schizophrenia, bipolar disorder and autism, among other mental disorders,” said Shashank Dravid, PhD, an associate professor of pharmacology in the School of Medicine and the lead investigator on the grant. “We think some of these may arise because of improper communication between neurons in certain unique brain circuits.”

Using cutting-edge technology including optogenetics, which use light to activate the communication processes between neurons, Dravid and the research team hope to be able to closely inspect the connections between neurons and watch for breakdowns.

Professor Yoland Smith from Emory University brings in electron microscopy expertise to further study this at the subcellular level. Dravid calls his team of Gajanan Shelkar, PhD, a post-doctoral researcher, Jinxu Liu, a research associate, Ratnamala Pavuluri, a research technician, and Pauravi Gandhi, a graduate student, his “four pillars,” and emphasizes the group effort involved in undertaking this project.

“We’ve had great teamwork,” he said. “The team approach reinforces what we do.”

Dravid said the latest grant is another step forward in making sense of the sometimes overwhelming data being amassed in the field of brain science. It all serves, though, to help answer questions humans have long been asking when it comes to the seat of reason, passion, art and science.

“There’s a lot of excitement around this field right now, a lot of different international teams working in this area,” Dravid said. “The fundamental question is: how is the brain wired? How does it work? We think this is one of the keys to understanding that wiring.