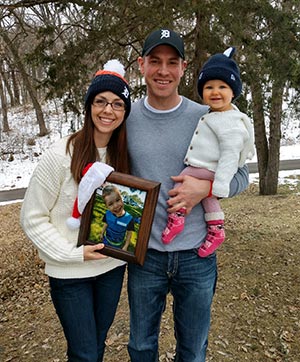 Triumph conquered tragedy Nov. 10 when the board of directors of the Papio-Missouri River Natural Resources District gave Ryan Walters, PhD, the answer he and his wife, Tiffany, had hoped for.

The board accepted a $105,000 donation from the Dominik Walters Memorial Fund as a contribution toward the estimated $279,000 cost of building a new children’s playground at the Chalco Hills Recreation Area in Sarpy County. In return, the board granted the Walters naming rights, with construction to begin in the spring.

Walters, an assistant professor with the Creighton University School of Medicine, said the decision is the culmination of a campaign to build a memorial to his son, Dominik, who died of cardiac arrest in August 2018 at the age of 4. Read the family’s story.

“We are in absolute disbelief that Dom’s Park will soon be a reality,” Walters said. “We are forever indebted to the thousand-plus individuals who donated to our cause.”

The new park will include a complete renovation of an existing 30-year-old playground where Dominik used to play, with the memorial fund’s contribution being used to buy playground equipment.

John Winkler, general manager of the Papio-Missouri NRD, said the playground is a welcome addition to Sarpy County.

“The Walters have turned unimaginable tragedy into a positive,” Winkler said. “Countless children will enjoy this new playground at Chalco Hills, as Dom and his family did. Dom’s Park is an incredible tribute to Dom and a gift to the Omaha community that will last for years to come.”

Walters said fundraisers driven by the Creighton School of Medicine were paramount in making the donation possible.

He said about $12,000 still needs to be raised and will be used to erect and arched sign to serve as the main entrance to Dom’s Park, and a memorial plaque describing who Dom was and why the park exists.

Donations can be made online.