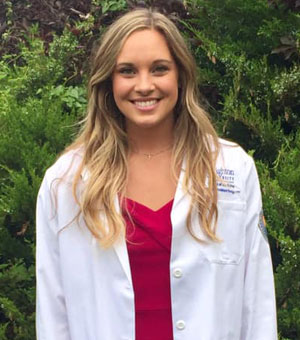 But first, she chased a different passion.

In 2016, she pursued the adventurous prospect of playing semi-pro soccer in faraway Australia.

Meyer was freshly graduated from the University of South Dakota that year, where she was a fixture on the school’s Division I women’s team, starting all 20 games in her senior year during which she scored two game-winning goals and was named to the academic all-Summit League team.

Torn between immediately applying to medical school and pursuing her love of soccer, Meyer poked around in search of an opportunity to play abroad — with little luck — when an email arrived out of the blue, from Calder United, a semiprofessional women’s team in Melbourne, Australia. The organization offered to pay her flight and ongoing living expenses if she would play center back for the team, which competes in the National Premier Women’s League of Victoria.

Three years later, Meyer, 25, is enrolled in Creighton University’s new PA program at the School of Medicine, pursuing the medical career she delayed while exploring life Down Under.

“I always knew I would go to medical school; I had even worked as a home health aide and a certified nursing assistant in high school,” Meyer says, “but it wasn’t until I came home that I thought about a PA program.”

During her October to January off-season, while back in Lincoln, Meyer had shadowed some PAs in emergency rooms, observing that physician assistants serve an important role on the health care delivery team. She was particularly interested in the personal interactions with patients.

She decided it was time to say a fond farewell to her Australian adventure and resume her journey toward a medical career. After interviewing at four PA schools she chose Creighton.

“Creighton just felt like the right fit,” she says. “I enjoyed the faculty when I got to do my interview, and I knew the reputation that Creighton has, especially in the medical community.”

Creighton’s PA program, which aims to create compassionate physician assistants dedicated to exemplary patient care, is a 28-month curriculum that results in a Master of Physician Assistant Studies (MPAS) degree.

“The addition of the physician assistant degree to Creighton’s lineup of health professions education program is long-awaited,” she says. “As an integral part of the health care team, PAs have been providing increased access to quality health care for decades.”