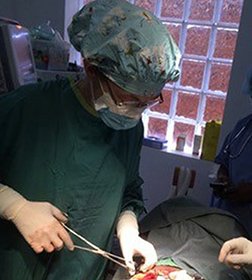 After 10 weeks in Tanzania as Creighton University’s inaugural Global Surgery Fellow, Kelly Shine, MD, has added a few procedures to her retinue.

There have been perforated intestines — results of untreated cases of typhoid fever and salmonella — and a bowel obstruction that turned out to be severe appendicitis and almost proved fatal. She’s pulled teeth, assisted with anesthesia and popped in dislocated shoulders. Then, there are the three gorings by cape buffalo she’s patched up.

“All things that most general surgeons don’t see too often or don’t do at all,” said Shine, who earned the two-year fellowship sponsored by the School of Medicine and the Creighton Global Initiative. “Sit in a room full of people in the U.S. and ask how many of them have had an operation, you’ll probably see a lot of hands go up: caesarian section, appendectomy, hernia. But then ask them what would happen if that’s not an option. Surgery is something we take for granted but it’s been getting more attention as an international health topic.”

A battery of studies have revealed a global health crisis when it comes to surgery. The World Health Organization found more than 5 billion people worldwide have no access to surgical care. In Tanzania, where Shine will spend the next year of the fellowship, the patient-to-surgeon ratio is 1.2 million to one. For comparison, it’s about 15,000 to one in the U.S. The Lancet Commission estimates 143 million people require additional life-saving or disability-preventing surgical procedures annually, but lack of surgical care.

But it wasn’t so much those big numbers that initially inspired Charles J. Filipi, MD, to create the Global Surgery Fellowship. In 2001, his son, a Creighton undergraduate, took a study abroad trip to Creighton’s Institute for Latin American Concern (ILAC). 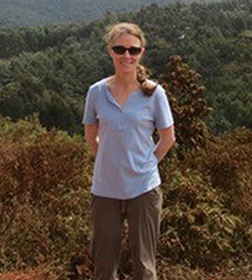 “And he came back — it was a life-changing experience for him,” said Filipi, the fellowship program director and an emeritus professor of surgery in the School of Medicine. “He said, ‘Dad, you’ve got to go down there.’ They didn’t have a surgery option there initially, but then a surgery center was built, and we organized a hernia surgical team and started performing surgery there. For a physician, as much as the patient, it’s a life-giving experience.”

Seeing the dire need for surgeons, even in a relatively prosperous nation like the Dominican Republic, Filipi started a nonprofit organization to send surgical teams to countries throughout the western hemisphere in need of surgical care, especially for hernia. When a massive earthquake shook Haiti in 2010, Filipi coordinated teams from Creighton to respond. Using ILAC as a staging site and supply center, the teams were able to get care quickly and more ably at the Dominican border after Haiti’s capital, Port-au-Prince, was largely devastated.

Borne of those experiences was Filipi’s desire to see Creighton live out its mission through a surgical post that could have a global impact. With Creighton President the Rev. Daniel S. Hendrickson, SJ, PhD’s creation of the Creighton Global Initiative and the backing of School of Medicine Dean Robert Dunlay, MD’81, the fellowship began taking shape.

“Fr. Hendrickson’s emphasis on global awareness made this a perfect fit,” Filipi said.

As designed, the two-year fellowship begins in Omaha with about a year at Creighton’s medical facilities. Following the time at Creighton, the fellow is then sent abroad. Creighton’s fellowship would be one of just two acute-care surgery fellowships in the world. Others are more focused on research.

Filipi’s own global encounters led him to the Foundation for African Medical Education in Tanzania, operating a 25-bed hospital in Karatu on the fringes of the Serengeti. The facility fit the fellowship’s international site criteria and Shine started her work there earlier this year. Kelly Shine, MD, Creighton’s first fellow in the Global Surgery Fellowship program, is living and practicing in Tanzania.

“It’s classic Africa,” she said. “The soil is all red, we’re just at the end of the wet season so the vegetation is quite green. We’re surrounded by agriculture — sunflower seed and coffee plantations — and then go a half-hour from the hospital and you’re in the Ngorongoro Conservation Area. I don’t see much wildlife from the hospital grounds, but we have had the Cape buffalo wounds and a few people bitten by baboons.”

Shine said the hospital itself is small but has a dedicated staff. The work of the fellowship, Filipi said, is to train staff in new practices and procedures.

“In many ways, it’s like doing surgery in 1950,” he said. “But the staff is energetic and eager to learn. The health awareness is there. You have a very dedicated staff of nurses who have seen just about everything. For us, it’s a matter of task-shifting and educating to provide the needed care.”

Shine, with 15 years practice experience and several stints abroad including work with Filipi’s Hernia Repair for the Underserved, was selected out of several applicants and was an ideal candidate.

“I feel fortunate to be able to start this fellowship for Creighton,” Shine said. “But the real hope is that this isn’t just a year or two. We want to build long-term relationships with the sites where the fellows go. We want this to blossom and to be a learning experience not just for the people we serve, but for the surgeon, too. I know I’ve already learned a lot in 10 weeks and not just in terms of the different surgical procedures.

“We see that with this fellowship, and with the idea of surgery as a global health issue, it’s bigger than one surgeon. People may need help with physical therapy, with laboratory management, with anesthesia. When you’re a patient in a place where you can’t go somewhere else, you’re in need of a team that can do it all. What’s been attractive to me is that I’m learning a lot about things we don’t always do. I’m being taught as much as I’m teaching.”

Creighton’s second fellow, Megan Straughan, MD, is currently working on the Creighton-based portion of the fellowship. When she’s done in Omaha, she’ll ship out for another site, most likely in Rwanda.

Like Shine, Straughan has also had experience in surgical settings overseas. She attended the Medical School for International Health, an institution in Israel partnering with Columbia University, and did a portion of her residency in Cameroon, in West Africa.

“I’m glad it’s something Creighton has started and I’m glad to be a part of it,” said Straughan, who will be taking her family, including two young children to her international site. “Global health and global surgery are something that have always been close to my heart and it’s good to see that it’s getting some recognition as a public, global health issue.”

Filipi, Shine and Straughan are hopeful the fellowship will create an important acute-care global surgery model whereby lives are saved, in-country providers are trained and thereby extend the benefit exponentially.

Moreover, the fellowship seeks to enlighten Creighton students at all levels to understand the desperate need and respond how they are able. While the numbers of those lacking care may be daunting, there’s a feeling the educational opportunity is one physicians are seizing upon.

“It seems like a drop in the bucket when you’re talking about tens of millions of people to one surgeon,” Filipi said. “But if we can spread knowledge in the country and train the trainers and find one particular doctor who becomes a good surgeon, he or she can teach others. Then we start making a difference. And that can go for nursing care, diabetes care, neurology, on and on.”