Medicine’s Human Side Explored in Podcast Hosted by Creighton Students 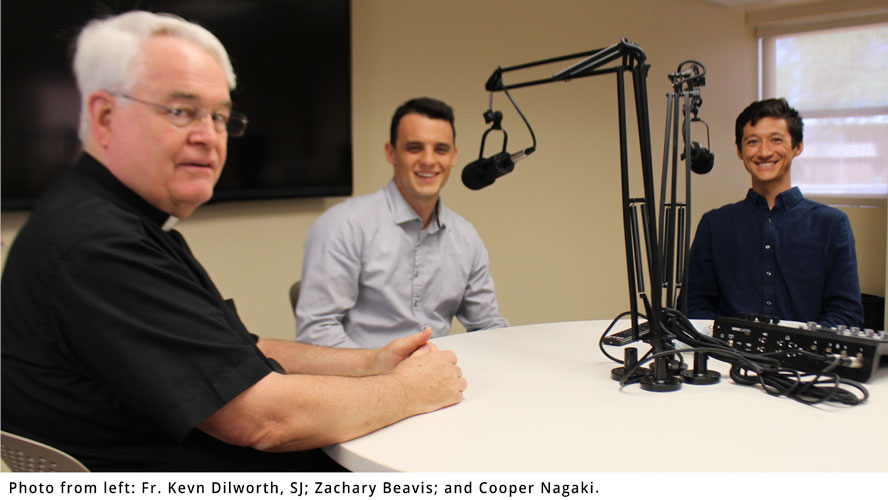 Amy Yordduangjun’s thoughts and feelings about being the low person on her medical team’s totem pole were not something she shared with anyone, much less making it a topic of a podcast. But as part of a project to explore the human side of medicine, she embraced the opportunity to put her deeply personal thoughts, fears and anxieties out there for all to hear.

It’s exactly that kind of deep conversation the show’s hosts, two medical students at Creighton University’s School of Medicine in Phoenix, had envisioned for the podcast, which began airing in January. The show, which is called “Esthesia: Untold Tales in Medicine,” seeks to humanize the practice of medicine and health care by sharing stories from those practicing in the field, whether they are students, doctors, nurses or other health care professionals.

“The purpose is to reorient people to the human side of medicine,” says Cooper Nagaki, who raised the idea of a podcast last fall at a student group meeting. “The health care world can be in a factory mode at certain points. The podcast gets people to tell their stories, tap into their stories and reflect on them.”

Adds Zachary Beavis, the show’s co-host along with Nagaki: “Sometimes the hardest part of doctoring is time constraints. When doctors see these terrible things in the hospital, sometimes the result of poverty, patients not taking care of themselves and families bearing the weight of all this, they are not allowed to say this sucks. They are expected to be an emotional stronghold for other people.”

“Through the podcast, we want to show it’s okay to feel, okay to admit your hurting, okay to be frustrated. But often there’s no time to express those feelings on the job,” Beavis says.

Yordduangjun was the third person featured in the podcast series. Nagaki, a third-year medical student, got the idea after recalling how he once gained some comfort from a podcast covering similar topics during a particularly intense period of studying for boards and feeling isolated. When he brought up the idea at a Beyond Medicine meeting, members were enthused about it. Beyond Medicine is a student group at Creighton that explores the humanistic side of being a medical student and encourages sharing experiences and reflections among its members. The group also participates in community service projects.

Beavis, also a third-year medical student and wellness chair for his class, volunteered to work on the project with Nagaki. The two host the show, select the guests and work with the guests to make sure their voice and perspective comes out during the podcast.

“Because it is vulnerable, people want to make sure they are saying the right thing,” Nagaki says. “We have to reassure them that we’re facilitating what they want to share. It’s like coaching.”

To help the guest focus on the story they want to tell, they are asked to write it out as a story or essay. After the guest reads their story on-air, the interview follows, with questions exploring the root of the guest’s feelings, experiences and perspectives.

“We do a lot of joking to try and keep it light,” Nagaki says. “We want the salient points to come out in a nonrobotic way.”

The conversations have gone over so well that the length of the show is closer to an hour rather than the original 30 minutes they envisioned.

Future plans call for expanding the guest list to doctors, nurses, physician assistants and others involved in delivering care. So far, all three guests have been medical students. (Because of the novel coronavirus pandemic, future interviews will be done over the phone if required.)

“The doctors we’ve reached out to are well-rounded people and great clinicians but also hidden philosophers and people who know themselves really well,” Beavis says.

The podcast studio is a study room in Norton Manor, which is part of the Dignity Health St. Joseph’s Hospital and Medical Center complex, and where the Creighton medical school is based in Phoenix. With the help of Fr. Kevin Dilworth, SJ, who is the medical school chaplain, the students use professional equipment for the podcast. Fr. Dilworth, who spent 11 years working in television, secured the podcast equipment from a benefactor.

“For me it’s been a very exciting and uplifting project,” says Fr. Dilworth, who also built radio stations at two high schools where he taught earlier in his career. “They’ve done an extremely professional job with the podcast. Students have been open and honest in their reflections. In the normal course of events, medical students probably wouldn’t have the opportunity to talk about these topics.”

A fellow medical student, Braden Olsen, who plays the guitar and mandolin, provided the introduction and outtake music for the podcast.

Nicole Piemonte, PhD, advisor to the Beyond Medicine group, says the podcast has been a nice resource for Creighton medical students and other medical students who have found their way to it. The show airs on Spotify, Apple Podcast and Soundcloud.

“The real value is medical students saying I’m not the only one who has had this experience or is feeling this way,” Piemonte says. “It has really made the students feel more connected to each other.”

The podcast currently can be found on Spotify, Apple Podcasts and Soundcloud.