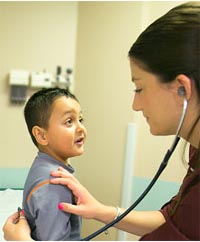 In the summer between the M1 and M2 year, the Pediatric Department offers a Pediatric Summer Academy (.pdf) elective. Students participate in shadowing opportunities in ambulatory and specialty pediatrics, summer day camps and clinical simulation scenarios. Opportunities for summer research are also available.

Longitudinal clinics at a number of general pediatric offices are available.

During the M3 year, each medical student will complete a 6-week Pediatric clerkship. This clerkship is divided into two 3-week rotations: the inpatient rotation and the outpatient rotation.

During the outpatient rotation, each student is assigned to an ambulatory pediatric clinic in Omaha or Phoenix. One week of mornings is scheduled in the newborn nursery at Bergan Mercy or St. Joseph's Hospital.

Fourth year medical students may select among the following courses in specialized areas of Pediatrics.